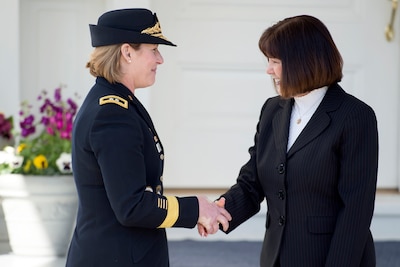 “We just wanted to say ‘Thank you,'” she told three dozen service members at an afternoon reception at One Observatory Circle, the vice president’s residence at the Naval Observatory here.

“I get choked up because I am a military mom,” said Pence, whose son Michael is a Marine Corps officer. “I’ve got my ‘mom pin’ on,” she proudly noted.

Women who serve often face multiple challenges, she said, such as balancing family with military life. The second lady noted she met March 20 at Fort Meade, Maryland, with female service members and heard about some of those challenges.

“We just had a great visit,” she said.

Pence pointed out the women at today’s reception represented various ranks and were from the five armed services — Army, Marine Corps, Navy, Air Force and Coast Guard. The second lady said she wanted to honor the range of women who serve.

“I think a lot of times, people in the military — men and women — aren’t told enough how much we appreciate you,” she said. “It’s not an easy place to be where you are, and I think we’re learning that more and more in the position that we’re in.”

Pence said First Lady Melania Trump wanted her to do something for Women’s History Month. The second lady said she knew immediately she wanted to honor women in the military.

“I just want you to know how much we appreciate you,” she said.

Pence introduced the highest-ranking guest, the Army’s chief legislative liaison, Maj. Gen. Laura Richardson, and thanked her for her years of service and sacrifice.

She then invited two service members to join her as she spoke: Air Force Col. Michelle Pufall, who runs two hospitals in Jordan on the border with Syria; and Marine Corps 1st Lt. Talia Bastien.

The reason for bringing the two women up, Pence said, was because it was their birthdays; she then led the reception in singing ‘Happy Birthday.’